Over the past 4 years that I have been singing with Amelia and Vocalocity in their various forms, I’ve seen a journey that has lead to some of my best memories and proudest achievements, and those of others I’m sure. The spirit of Vocalocity had humble beginnings in the music room of Katoomba High School in 2014, with a few students having lessons and some small groups forming to try and sing together. It wasn’t perfect, but Amelia never doubted that it could be done. The groups then merged into a school choir under Amelia’s direction and endless patience, and then again into the very first Vocalocity Vocal Ensemble, the beginning of an age. With a lot of elbow grease and a forest’s worth of lost sheet music we learnt pieces ranging from Adele’s ‘Rolling in the Deep’ to the lullaby ‘A La Nanita Nana’. Every time the group rehearsed no matter rain, hail, or shine, Amelia would show up her bubbly self, ready to tame a room full of stubborn teens (or at least try). A highlight was placing in the Penrith Eisteddfod, particularly when we found out on the train home, as we realised that all our work had been recognised.

Next, Vocalocity moved out of home so to speak and left KHS. However, most of us decided to stick around. At the same time as putting more and more work into our little group, she also opened a shop for music gifts, adding a new aspect to Vocalocity and bringing in new students, some of which joined the ensemble. In a rare questionable decision, Amelia allowed me to work in the shop, giving me time to groan over music puns, and help spread trademark Vocalocity positivity to Leura. Amelia set our singing sights high from the beginning; teaching more complex arrangements and challenging us to work better as a team. Taking the leap, we signed up for the Australian National Eisteddfod in Canberra and rehearsed like crazy! Nearing the date, Amelia was successfully tidying up pieces and organising the logistics. Stresses were high, but confidence was also, and Vocalocity pulled through after under 6 months with all members with a truly amazing first place! It was such an experience for everyone to have achieved together something so highly regarded, as our group of under 18’s had beaten choirs that had been performing together for years, if not decades. Vocalocity didn’t stop there, however, and continued the winning streak even with absent members to take home at the Hornsby Eisteddfod two placements as well, with glowing adjudicator’s remarks. On a much less grand note, thanks to lessons with Amelia throughout the years, both of this year’s music HSC students made it through alive and with impressive marks. Often putting in her own time and I assume much of her sanity, Amelia dragged us towards vocal success and managed to land me on the HSC Honour Roll for Music 1. If that isn't a testament to both her strength of will and her ability as a teacher I don’t know what is.

And now for a little sentimentality. As 2017 closes and another hopefully musical year begins, I write this to show how far Vocalocity has come, not just by leaps and bounds as we’ve seen in recent successes, but also due to consistent effort from the students, but especially from the never-ending belief and often seemingly thankless work that Amelia has put into Vocalocity, in all it’s faces, for years. As one who’s been a small part of this journey, it is difficult to express the true impact that Amelia and Vocalocity has had on all of us; both as musicians and as people. I remember the amazement when after each song an auditorium of peers and competitors alike would give heartfelt applause and even cheer, and how proud I felt to see something this important to all of us be recognised and appreciated as genuinely decent music. But I also remember in humour the times when things were not working out, and in fondness the family that I believe Vocalocity has become. To Amelia I say thankyou from us all, for the incredible memories that will be cherished forever (or at least until we make new ones at the next rehearsal). 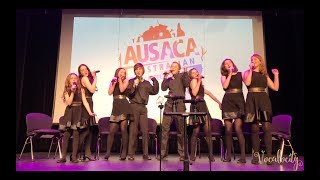 Vocalocity in the Australasian Choral Championships